I’m always so honored when we have a Reiki session with a pet. Each one is so different, has its own personality like we people do and a different energy as well.  I get so attached to them too as if I have known them for years. It’s hard to explain but to get to talk to them on a spiritual level is so amazing. Then and again one will knock to me to my knees.

I was on our fan page posting about a golden we had just finished and I saw a post from someone about a duck.  A duck? Wow, a duck.  Sure we could help a duck. I felt so bad for him too since he was hurt by a dog. The dog had actually part of his bill off.  Ouch! I thought, this dog certainly didn’t mean to hurt the duck but I’m sure the duck was in pain. Reiki could help. Reiki would help.  That much I knew.  The Mama of this duck wanted to participate in Reiki Talk! Our first client since the beta testing has finished. I thought our first client would be a horse, a cat or a dog.  A duck? How awesome is that.

I did not realize how awesome it really was going to be. As we started with the Reiki session, I felt a powerful connection right away.  There was such a sweetness to this duck.  He was in pain, had been angry, frustrated and afraid. Yet as Candy and I sent the healing, he eased right into it. There was at one point I even said to this duck, I love you, you are going to be okay.  I think as this was coming out of my mind to him, even I was surprised.  Afterwards I remembered my brother telling me, Reiki is love.  That is the source of Reiki. Love. 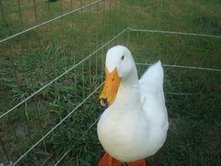 This duck talked to me.  He felt better, he felt safer. He knew he would be okay.

When he talked to Janet, he said that we “girls” were so kind and that we talked to him. He said the Reiki was calming and reassuring. He called Reiki his friend. All of us had never heard Reiki being called this way. But Janet told him he could call in his Reiki friend when he needed to.  When he needed to take that pesky medicine to help him feel better.

This was a Reiki Session that will stick with me for a very long time. What a blessing each and everyone of these pets are .