So I get a lot of hits on my blog that I wrote about Sammy : Canine hip dysplasia, not words I like to hear and I wonder about these poor dogs and their owners if they are fighting canine hip dysplasia as well. I did do a couple of follow up blogs on Sammy but I wonder if the dog owners read them. So its been since June that I was told that Sammy had it. She had trouble walking up the stairs, getting in my car.  She was not happy. I never gave her the Rimadyl but she gets glucosamine every day.  She received many reiki treatments and still does each evening.  I had even bought her a ramp for the car, we never taught her how to use it because she never needed it!! She seems happy and will be 9 years old next year. 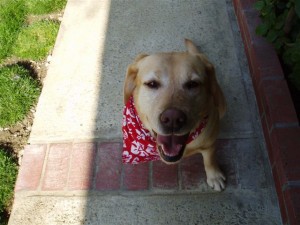 I was reading the LA Times, and they talked about Heidi. Another dog with hip dysplasia. This is Heidi. She was “discovered” this year in the park by a pet talent agency; since then, she has embarked on a one-dog quest to break into the business. This is her Hollywood story as chronicled by Times staff writer Diane Haithman. And this is her “head shot”: That longing look was the result of seeing a biscuit just out of reach. 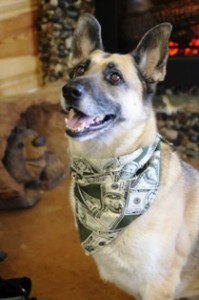 Unlike many Hollywood actors, Heidi does not have a chef or a personal assistant, a chauffeur, a therapist, an astrologer or a hairdresser. Sure, she has a trainer, but not a personal trainer — you know, the gym rats who charge $100 an hour to sip vitamin water and talk about reps, carbs, abs and glutes alongside an already toned person who sweats, but not too much, in designer gear.

True, Heidi has a full-time staffer who will bravely force an arm or leg beneath the sofa to fish out her red ball every time she lets it roll under there, but it’s an unpaid position, which I know because I have not received a check in five years.

What Heidi does have, however, is an acupuncturist. Like many large-breed dogs, particularly German shepherds, she has joint problems: hip and elbow dysplasia, plus arthritis. Her X-rays are not pretty. I bring this up not because the dog wants your sympathy, but because dysplasia may affect a canine’s performing career.

So there is a lot of different ways to help our dogs with canine hip dysplasia.  I know my dog is doing great!