During our latest Reiki Animal attunement class were two kitties,  Neela and Topaz: 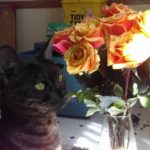 How long have you had pet?
Neela 8 weeks old/ Topaz 5 months old
Purpose of attunement
Neela has bad allergies that cause her to have asthma attacks & her face swells. She is on medication but would be nice if she could help herself a little. She hisses all the time and would be nice if she cut back, lol. And Topaz hides whenever someone comes around. He had a hard start, I was told he was born in a tree to keep him from predators, he’s such a good boy I think he might enjoy something playing around with it.

After the attunement we heard back from Dad:

Hi Ming,
Both kitties seemed to mostly sleep through the attunement this evening, and they continued to sleep for about another half hour. My wife says she definitely felt something different when the attunement began. We both sat quietly and stayed present. It felt like a meditative space. We will continue to watch the kitties and report any changes we notice. Thank you!

Both kitties are doing well. It seems like they have been resting a bit more, especially Neela. Neela usually sleeps on the end of our bed at night, and I have noticed that lately she has been going to bed a bit earlier than we do. It was just something I have noticed that is different. Anyway, we are excited to be a reiki family together! Thank you Ming and Candy.

At the end of the week, Candy interviewed them on their thoughts about healing:

Neela said Neela listens and then puts every lesson into healing practice. Neela knows the importance of not just paying attention in class but the follow through. Slow and steady wins the race in all things. Neela fulfills every day a plan to do the Reiki energy healing . Neela likes to finish healing Neela, Topaz, Mom, Dad and then Neela starts all over again.

Topaz said Topaz needed to really listen and pay very close attention in class because Topaz has an inner warning system and Topaz seems to always be alert-each situation is something Topaz looks at and takes caution before reaching. Topaz has been working very patiently on energy healing for Topaz – its first (which is exactly what I taught him!!!!) Then Topaz will reach out and help heal others later! 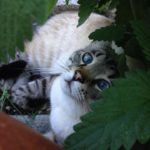