Attuning Jax to reiki was such a delight: Here’s his story: 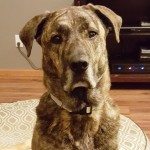 Jax I got from the San Jose Shelter – he was on death row. He was abandoned at a San Jose dog park – at probably 5-6 months old. The guy who found him took him for about a 1 week to try to find his owners but considering he already had a dog and he and his wife lived in a one-bedroom apartment he couldn’t keep him (he was already 50 lbs at that time). He took him to the shelter thinking they would find him a good home. For whatever reason the shelter labled him as agressive and gave him one week to be claimed otherwise he would be put down on that Sunday. The guy knew he was not at all agressive and contacted all of the area rescue groups pleading for someone to rescue him. It came to the rescue group (Pound Puppy Rescue) where I was a foster. There were no available fosters and I had recently been put on the “bench” because I had a parvo puppy the month before (who did not survive) and could not foster for a year to ensure the parvo virus was gone from my house/yard. Anyway I begged my coordinator to let me pull him. She said he could get parvo at your house. I said yes, he might or might not get parvo at my house and if he does get parvo he might or might not survive but if I do not go get him he will be 100% dead on Sunday. They let me get him on that Friday! I fell in love immediately and adopted him myself. No parvo issues. He is the SWEETEST boy. Assertive and protective, yet extremely friendly. 87 lb lapdog.

I gave him the birthday of 4/10/2011
He is 4 and will be 5 in April.
His DNA indicates he is 75% Catahoula Leopard/25% Golden Retriever. (Brindle is a Catahoula less common color. He size and thicker coat is golden)
He is a momma’s boy. (he loves everyone)

At the end of the week, Candy asked Jax what his feelings were about learning:
Jax said Jax really wanted to learn everything thin in every class. Jax wants to distill all this wisdom in Jax’s world. Jax tries to seek out the best in everything. Jax appreciates all the knowledge that Jax has acquired and will continue to apply on this journey in Jax’s life. Jax just kees tuned into Mom with love and gratitude. Jax wants to keep Jax’s family safe and protected like the guardian angels here. Jax, Lola and Macy have angels too along with the big archangels!

His Mom said: Jax is very smart and catches on to everything with little effort from my side. He amazes me. He is also very, very protective of our family. I call him the perimeter guard. He runs all around the perimeter of our fence “guarding”. He will play with us – but the second he senses or hears anyone outside of the fence (people walking by, other neighbors in their backyard) he is all over it and will push Lola & Macy back from the fence to say “back up sisters – I got this!”.