Writing the post for both Peeta and Sebastian since they studied together. I loved receiving this letter from Peeta’s Mom:

Hi, I saw the recording of your interview with Val Heart. You mentioned that you have trained Fur Babies as Reiki masters. I have an almost 3 labradoodle. I had a session with a shamanic healer for him when he was about a year old. The shaman said that Peeta is a healer , but this person didn’t know at the time how it would manifest. Peeta watched your interview with me. Afterwards I asked him if he would like to be a Reiki master and he really wagged his tail and seemed to be saying yet with his eyes. So…I am wondering how that works and how much you charge to train fur babies. He is very intelligent and articulate. He had a couple sessions with an animal communicator. When I got the transcript I couldn’t believe his vocabulary. I asked her for sure and she indicated that these were indeed his words. 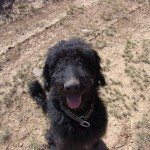 Just signed my cat Sebastian up to have the attunement with Peeta. He already seems to know a lot about healing. For several years he comes up heart to heart with me if he senses I am upset emotionally. He purrs and looks into my eyes. When I start feeling better he jumps down. He also knows if I have any physical discomfort. The other day I had some weird pain in my abdomen. I was actually doing some energy work on it myself. Sebastian came up and laid his abdomen on the exact spot and looked into my eyes and purred. When the pain went away he knew and jumped down. So… he seems to want to learn more. I think it would be good for both he and Peeta to share this, since they are already buddies. Who knows what they might be able to do together.
__________________________

Peeta has been a star student and not surprised at all he wanted to be Master. Intuitive and a quick learner!

After the attunement: Peeta’s Mom wrote:

It was interesting last evening. Sebastian and Peeta were both laying quite close to each other on the floor around 6pm your time. They were both relaxed and resting. Then Sebastian suddenly got up and headed for the water bowl and drank a lot of water for a cat. Then he hopped up in the chair with me and it seemed he was trying to wrap his paws around my waist. He then proceeded to purr and purr and purr. After awhile he got down and drank more water and then laid down on the floor. Meanwhile Peeta started doing like dogs do when they seem to be dreaming, moving his feet and making yipping sounds. Then when that stopped he just laid there for quite awhile. They were both quite mellow all evening. Both extra loving. This morning on our early morning trek through the snow, Peeta was full of energy but it seemed different. He is a bit of a “space cadet” at times and he seemed more grounded and attentive to me than usual. There just seems to be more love floating around both in my house and out in the forest where we walk.
_______________________

Last evening a few minutes before class time, Sebastian went into the bedroom and settled in one of his secluded spots. About the same time Peeta came over and laid down by me in the livingroom. At first he wanted me to pet him. Then he just seemed to drift off. They were both very still and quiet for about an hour. Peeta did do a little deep breathing at times. Then at about the same time they both got up and hung out with me and Solomon the rest of the evening. Sebastian did drink more water too. 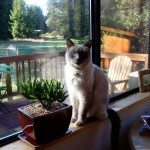 Last evening at class time, Peeta laid down next to me. Sebastian got up in my lap. Peeta rolled over on his back and stayed that way for about an hour. Sebastian seemed to be in a trance. And I could hardly keep my eyes open. I think there was a connection with whatever was going on for either him or both of them because as soon as he got down I was very alert. He got a big drink of water then and another in awhile. Peeta just kept laying on his back and stretching his legs at times.
_______________________

Last night was interesting. When I sat down to meditate Sebastian immediately jumped up in my lap and began purring intently. Then he got hot again. And then my body got very warm. We just stayed like that for awhile. Then he got down. I realized that I was very sleepy. Peeta came in from the bedroom a little while later and laid by my side again. Then I guess we were all sleeping or integrating or both. The next thing I knew it was time to go to bed. I did notice that I had less tension in my shoulder and my neck was even looser. Both cats started playing and running around the house. That’s always fun to watch.

This morning when I took Peeta for his run in the forest he was even more energetic that he usually is. I really didn’t think that was possible. He was also extremely happy. And yet he had a calmness about him. I also noticed that I had a lot more energy. We are out there for about an hour. The forest is either up or down all the time. Sometimes I have gotten quite tired by then end if going uphill. Today I had more than enough energy.
__________________________________

When we connected with Peeta and Sebastian at the end of the week:

Peeta said Peeta feels so much joy and pride because Mom made all this possible for Peeta. Peeta wants to help heal so many animals and family, friends , birds, the world. These are jus a few of Peeta’s goals. Peeta feels so much enthusiasm doing the work within so Peeta can be the champion of healing. Peeta’s aim has always been beyond the normal dog thing. Peeta feels blessed to have a collaborator in helping others that is Mom. Sebastian and Peeta take turns healing Solomon and then Mom, then Peeta take turns healing the couch, the door, the windows – you get the work that we are doing. Peeta’s house will soon be soaring then the neighborhood!

Sebastian said Sebastian is finally able to unleash the power that comes from within to help heal so many others. Sebastian and Peeta can create a new healthy world around mom and Solomon . Sebastian learned every lesson and practiced. Sebastian is very motivated to do better and to help heal more animals and people. Peeta and Sebastian have made a determined effort to be the best and to do the best. Sebastian does use the attunement to go within and keep Sebastian in balance so the work Sebastian hopes to do will be the best possible each and every time.