From Phoebe and Purrl’s Mom: Because Jack’s attunement had such a miraculous and calming effect on him, I would like for my other two cats, sisters Purrl and Phoebe to also be attuned.  Prior to adopting Purrl and Phoebe from a local
rescue organization where I volunteer, I fostered them and gave them Reiki to help socialize them—so they are familiar with the energy. They were almost feral when I first got them and they have come a long way in eight years. I feel having them attuned will help them progress even further with their healing. 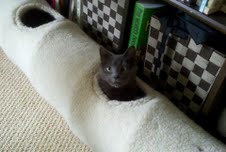 Purrl and Phoebe were very quiet and meditative during the attunements. Purrl was next to me on the couch with Jack on the other side and Phoebe in my lap. Purrl had her eyes half open, and was looking at Phoebe quite a bit. Phoebe slowly writhed around in my lap purring continously. I gave all three Reiki during the attunements. Then they konked out sleeping afterwards.

This is what Phoebe shared about her attunement:

Phoebe is rubbing up against everything then turning and healing it. Not all that Phoebe heals is alive because the chair, the litter box, the window and the sun rays are all within Phoebe’s healing force which covers huge areas. Phoebe just feels like Phoebe is a magic wand- snap, zap, pop. Now dont you feel better? Phoebe practices healing this way. Purrl is not part of this thinking. Purrl is off healing Purrl and wants Phoebe to be more internal with some of Phoebe’s healing. But then Phoebe sends healing energy right to Purrl- , next Jack, now Mom- who is coming in the door? Phoebe’s magic healing wand is here!

Phoebe made us laugh, what a cutie. So wonderful she finds the healing energy so much fun!!! Because it is. She’s not the first cat to send healing to her litter box either 😉 Why not, we can Reiki anything.

How wonderful! That is definitely Phoebe. 🙂