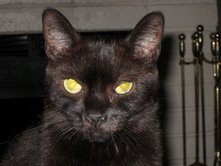 Two black kitties received their Rabies and FVRCP shots. One of them seemed to not do as well afterwards. He was hiding, not eating and not drinking.  At the end of the day, when I heard he was still not drinking, that was concerning. Reiki for this black kitty would defnitely help.  When we started the session, he said, “Yowser, for me?!” (This is the second time in a week that we have heard that from pet that has received more than one Reiki session) This kitty was quite excited that we were there.  He had Reiki before from us quite awhile ago.  He said he was feeling achy all over, flu like symptoms. He said he would be okay. He also wanted his Mama to stop hovering. He said,” Mama keeps hovering, tell her I’m going to be okay I just don’t feel good right now. ” I got the sense that his tummy hurt so as I sent Reiki to his whole body I concentrated in the tummy area. 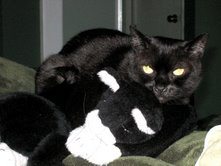 After the Reiki session, Candy said to me, what is “Yowser?” I laughed so hard. I told her I had not heard that in years. Candy had never heard the expression. We both laughed.  When I told the Mama he said “Yowser!” She said it was just said in their home and on TV.  We all laughed. Candy said, if you don’t believe in Reiki, you have to, because “I can’t make this stuff up!” Mama also told us she had been hovering which of course is a natural Mama response.

Mama told us right after the Reiki, her kitty came out of hiding, it had been close to 36 hours! He had some treats and then curled up right next to Mama! The next day he was eating and drinking. Yay!!