Anxious Dog in Dubai receives Reiki: We received an email from Dubai! Here are a few pix of Louis, one where he looks very anxious (a common occurrence) and a couple of others where he’s more relaxed/happy. He’s five years old, neutered, found on the street aged about one year, in a shelter for two years, with us for two years. He’s a very nervous dog, prone to aggressive behaviour and snapping if he thinks you’re going to hurt him (i.e. if you try to bath him or have anything in your hands, such as a frontline vial, ear drops, nail clippers, tick remover). 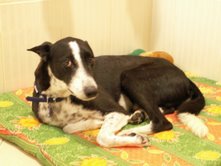 He’s a nightmare at the vet, if you can actually get him in there in the first place. Screams the place down, snarls and tries to snap. Have had some success via behaviour modification and clicker training and his confidence has grown, but we still feel that he needs a little bit extra. There are lots of issues that need to be addressed. He’s very affectionate if he feels safe with you, but has occasionally turned and become unpredictable. We can read him very well now and this almost never happens, but it can be a problem when we have guests. He also has an unpleasant habit of guarding doorways so that our other three dogs cannot pass. They get scared and have to wait to us to guide them thru while he growls like crazy. Would love him to be more relaxed about this. He also guards his bed, you cannot touch him in his bed (this we can live with, but would rather he would be more relaxed there) and barks anxiously/stereotypically when he wakes up and feels unsure. He’s also noise phobic, once bolted when he heard fireworks and we lost him for 48 hours. We think he’s been beaten/abused (he flinches if you pick up a broom, mop or similar), and just want to help him find some sort of peace of mind/generally be more relaxed. 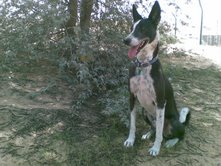 After one reiki session we received feedback! My husband said Louis looked ‘lighter’, as in lighter in spirit. He was more confident when out for his evening walk in terms of his posture. Ears were not back nearly as much as they usually are, even when he was being growly and guarding doorways from the other dogs. One time when this happened and we removed him and put him in a sit, he calmed more quickly than usual and just shook it off, literally. His tail has been wagging a lot more than usual, he’s been more animated than usual, but still a bit cranky and nervous. When out for his walk tonight he got a thorn stuck in his paw and he came rushing up to me and held his paw up for me to take it out. He has never done this before. It’s taken us two years to even get him to allow us to approach him and get anywhere near his paws, and you have to be really really fast before he snaps at you, making sure you just lightly touch the paws and don’t grab them. So for him to come and offer it and actually allow me to remove a thorn is quite a development. Thank you! (We are going to give Louis a second Reiki session as well!) 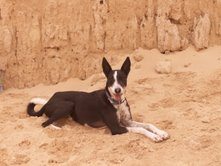 After the second reiki session of two mental healings:

Louis has been bouncing around today full of energy. He’s been mouthing at us and licking us (which he never ever does), tail wagging like mad, looks a lot softer (muscles not as stiff as usual in both body and face), less whale eye, very very perky, sort of as if he’s regained his joie de vivre. He’s even less growly at the others, although he still has his moments. He seems to have a lot more energy today!

And even several days later, we checked in with Mama, she said Louis is still a puppy and the other animals are getting energy from him!