I adopted Casper at age three from a pit bull rescue. Although his home situation wasn’t a very happy one, at least just before he went to the rescue, as far as I know he was never abused. He has always had problems with allergies – he was almost completely hairless when I adopted him, and the allergy specialist vet said he had the worst case of pruritis he’d ever seen.  Now he sports a pretty thick hair coat, and his allergies are under control with medication (steroids).  He has to be medicated in order to manage the allergies, which I know will shorten his life, but his condition was so severe, and he was suffering so much that I made the choice to let him have a shorter but very happy life.  He is seen regularly by a vet, and so far is not showing signs of any side-effects from the meds.  His other problem is his hind end.  He lives to play; has injured his ACL ligaments a couple of times while playing, and as he ages his hind legs are getting weaker. 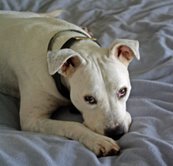 After Casper’s reiki session, Mama wrote :Casper obviously LOVED his reiki session!  I had my back turned and was tending to some horses, not focused on him at all, when I heard scampering coming across the ice behind me.  I turned to see him skittering as fast as he could in my direction with the daffiest grin on his face!  When he got to me all 70 pounds of him was bouncing up and down, a ball of grinning, kissing excitement.  He spent the next hour playing ball with Nicki and me, and was absolutely glued to me when he wasn’t running around — he definitely wanted to communicate his joy.  When I came inside and sat down in my usual easy chair, he hopped up on the ottoman, looking me in the face and trying to kiss me.  We went for a ride in the car about an hour later, and all he wanted to do was put his head in my lap,, love on me and have me hug him.  He’s finally worn himself out and is taking a nap.

I noticed you said he was looking all around when you were working with him.  When Casper gets excited and/or meets new people, he “spins” — it looks like he’s chasing his tail (and sometimes he is), but most of the time, he’s just whirling around.  Like I said, he wasn’t where I could see him when you were working with him, so I don’t know if that’s what he was doing, but I wouldn’t be surprised!

Casper has been a bit depressed-seeming (for him, since he’s the eternal optimist)  lately, so you made his day.  Thank you! Vicki, Maryland