Of course they do! I saw on the news today someone had captured on video- a dog had been hit by a car on a Chile freeway and another dog risked its life to go into traffic and drag the dog to safety.  People did not even help. What an amazing dog. Homeless dog tries to save dog hit by car in Chile

Out of London news today– Dogs appear to experience a range of complex, unpleasant emotions such as jealousy and pride, scientists have discovered.

Dogs hate their owner showing affection to other dogs.

Until now, this type of behavior had only been shown in humans or chimpanzees, but researchers suspected that other species that live together could be sensitive to fair play — or a lack of one.

“We are learning that dogs, horses, and perhaps many other species are far more emotionally complex than we ever realized,” Paul Morris, a psychologist at the University of Portsmouth who studies animal emotions, told The Sunday Times.

“They can suffer simple forms of many emotions we once thought only primates could experience.”

Scientists noted that dogs hate to see their owners being affectionate to other dogs and can suffer if a new baby or partner arrives on the scene.

To test the theory, Friederike Range and colleagues at the University of Vienna in Austria asked 33 trained dogs to extend a paw to a human.

The animals performed the trick virtually all of the time whether they were given a reward or not — when alone or with another dog.

But the dogs’ enthusiasm waned when they saw other dogs being rewarded but received nothing themselves.

Dogs that were ignored extended their paws much less often, doing so in only 13 out of 30 trials. They also showed more stress, such as licking or scratching themselves.

“They are clearly unhappy with the unfair situation”, Range told New Scientist magazine. She also suspects that this sensitivity might stretch beyond food to more abstract things like praise and attention.

“It might explain why some dogs react with ‘new baby envy’ when their owners have a child,” she said. 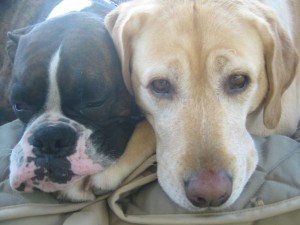 Well, I didn’t need a science article to tell me this! But nice that it gets acknowledged!

To the left is a picture of Sammy and her best best friend Ry. Ry is no longer with us but his memory lives on. Talk about 2 dogs that would do anything for each other!