We got a request to Reiki Duckers. He’s an awesome duck! We had a session for him this summer. But Mama said it was an emergency, there was blood on him! He was rushed to the ER. When we went in to Reiki him, there was just fear we could pick up so we just sent him healing energy. He came home and Vet said he was molting and was having some kind of allergic reaction so he was picking at himself. He was slowly getting better.

Later on his Mama wrote us: Duckers is back to pulling his blood feathers out, causing him to have blood all over him. The vet said it could possibly be a behavior issue. Based on what you said yesterday about how he felt, that would make sense. Maybe because of Dasher passing on? Anyway, at your earliest convenience, can you please do another reiki session on him to help him not be so itchy and as well calm him down? He seems very neurotic right now. We are going to spray him down yet again with an anti-itch spray, so hopefully he won’t hurt himself throughout the night. 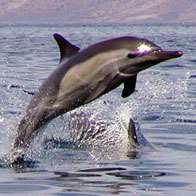 After Dasher had passed, I had mentioned that maybe Duckers would be grieving too. I remember the first time we gave Dasher a Reiki session, he had said I’m not afraid because Duckers told me about you. I knew instantly there was a bond between the dog and the duck. As we went to Reiki Duckers, he told Candy he was mad, mad and sad that Dasher was gone. He didn’t understand why Dasher was not there! We gave him comfort and mental healings. We told him we were sorry that Dasher was gone. During the session a dolphin appeared! There were many other healing animals that joined as well. Duckers is so loved, I think many healing animals wanted to help as well. I had never seen a dolphin before! This dolphin was there to help the relationship and bring harmony!

After the Reiki session, Mama said he is picking less, drinking more water and eating a bit more. They brought him in the house to sleep at night in a big crate! They said he was much happier sleeping inside. Sweet sweet Duckers!

All pets grieve, don’t forget to take care of your pets while you are grieving too!