Cat with Feline Infectious Peritonitis- The other day I had called Candy about a personal matter. I did not know Candy personally. As I started to get off the phone she asked in a knowingly sincere way, “How are you?” That response put me back because she didn’t know me. I had hung up and something told me to call her right back. Candy answered and I said, “I’m not ok, how did you know?” Candy told me what she did and I sat there listening in amazement. Because just the night before I had grabbed this Natural Cat book and opened it up to Reiki Healing for cats!!!! 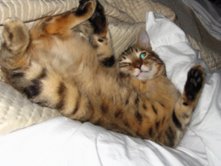 My cat Oscar was critically ill and the Vet was preparing me for the worst!! OMG I thought,  is it CANCER, Feline infectious peritonitis…WHAT- I was panicing. Oscar was only 2yrs old…

Candy and Ming sent reiki to Oscar on the day that I received the worst news. They did 3 reiki sessions on Oscar during this whole situation.

Later in that day, the Vet called with news that Oscar seemed to be in better spirits- he was finally eating!! The next day more testing began and no cancer was found nor was there FIP found. Reiki had been done on Oscar again.

Lastly the Vet did a colonoscopy – Oscar woke up fine, vocal and HUNGRY

Candy and Ming had done one more treatment…. Vet calls. “I don’t understand this- Oscar is doing great. He should be tired and he is so vital”.

According to the time line- Oscar’s healings seem to happen at the same time of the Reiki healings!!!!

I told the Vet the time line of Oscar’s healing and their mouths dropped and eyes filled with tears!! They now refer other animals to Reiki Fur Babies. They call Oscar the “Miracle Kitty”. Oscar has since been running around and doing well!

All my love to the angels at Reiki Fur Babies!